The play button to playback the song.

The play button toggles to the pause button to temporary stop the song.

The rewind button gets the song back to the beginning.

The step button playbacks note one by one.

Swipe left or right to scroll the music sheet forward or backward. 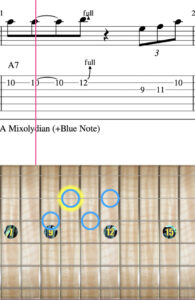 Tapping on a string plays the sound of the position.

The zoom button enlarges the currently playing frets. Tapping it again gets back to the full frets view. 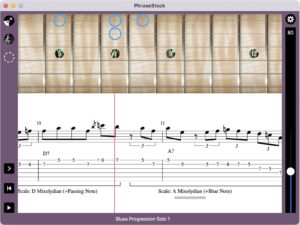 Swiping up or down adjusts the playback speed of the song.

Tapping on the BPM number resets to the original speed.

Tap on the gear button and bring up the setting window.

Chord tones and scale tones are shown on the fretboard as directed at the music sheet.

Top third button in the left, which is three states toggle button, controls how scale tones and chord tones are shown.

Tapping on the G clef icon shows a list of songs.

Choose an instrument you prefer. Guitar or Bass. 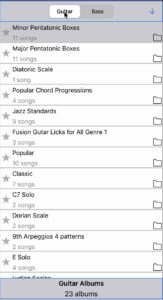 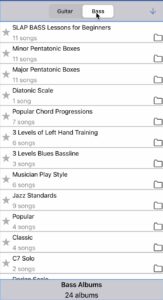 Tap on an album, then Tap on a song. 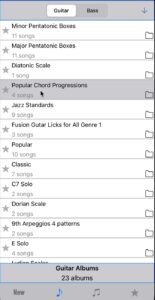 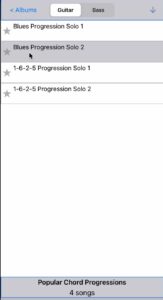 Songs good for your practice.

You can bookmark an album and a song by tapping on the star icon. 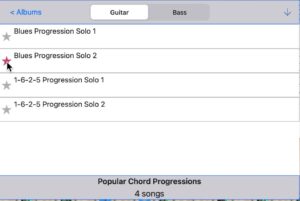 Double taps or long press on a measure to select it. Tap the start button to playback the measure repeatedly.

Swiping the handle at the top left or bottom right expand or shrink the selection.

Tap on the expand button to select all of the song.

Tap on the close button to cancel the selection.

You can choose one of three looping options depending on the progress your practice.

Tap on the gear button to show up the setting window.

Mute solo every other loop.

Show or hide notes positions of the playing measure.